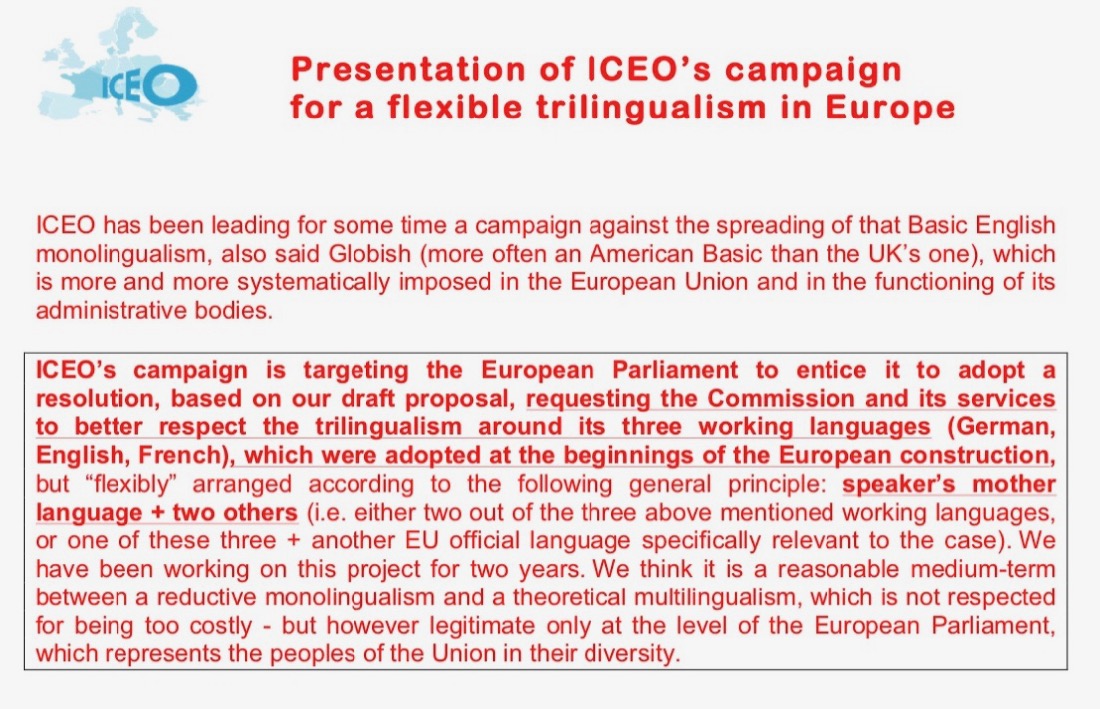 Support to the European Committee for resisting Monolingualism

Support to the European Committee for resisting Monolingualism

To save our languages of Europe and the ways of thinking they convey, more and more threatened by the monolingualism and the concepts that this monolingualism imposes, in the legal matters as well as in all other areas, in the European Union.

– Refusal of this monolingualism;

– Return to a “flexible” trilingualism either based on the EU Commission’s working languages ​​(English, German and French), or more generally on 2 languages plus one (that of the speaker) and so :

– Valuing first the mother tongue of the speaker as the best means to express one’s thought.

As above said, ICEO has been leading for some time a campaign against the spreading of the monolingualism more and more systematically imposed across the European Union and in the functioning of its administrative bodies, to the detriment of its other languages.

In addition, that monolingualism is spreading in the media, in the entertainment and advertising fields, because it joins a form of snobbishness – sometimes in a misinterpretation of the original language – but also in business and now even in the university world. This is intended to persuade us that there is only one language able to say everything rightly and to support international trade; so that, to be successful in business or to be published when you are a scientific researcher, it must necessarily be in one universal language only, all others being systematically excluded.

This is done openly or insidiously, despite formal proclamations in favour of multilingualism, which is the official policy of the Union.

Anyone can see that both Europe and our own national authorities lead us to generalize the teaching and practice of English at the expense of other European languages, even in primary school or kindergarten. Even more, in intra-European affairs, English is imposed to all member countries as the only language for the programmes and projects financed by Brussels, thus pushing the young people to study and practice no other language but that one.

At ICEO, with the support of VDS in Germany (Verein Deutsche Sprache e.v.), we have recently launched a campaign towards the European Parliament to entice it to adopt a resolution, on the basis of our draft proposal, requesting the Commission and its services to respect the use of trilingualism :

– either around the three ‘pivot’ and working languages that this Commission had itself adopted but more and more often forgets in its current practice,

– or based on one, out of these three, plus another European official language, if relevant to the matter, after the speaker’s one.

As a fact, we have extended this concept to that of a “flexible trilingualism” highlighting first the speaker’s native language as the means to the best expression of his/her thought, prior to its release in two other European languages, including at least one of the three working languages of the Commission and another one, relevant to the purpose of the intervention, at his/her option.

This project – and the campaign that we have launched – is based on two main documents:

We think that this proposal is a reasonable midway solution between a reductive monolingualism and a theoretical multilingualism, which is not respected for being too costly – but however legitimate only at the level of the European Parliament, which represents the peoples of the Union in their diversity.

In so doing, we do not have, of course, any particular hostility against English in itself, a national and cultural language like others and fully respectable as such. Nor have we anything against the English and British nations which have strongly marked the world’s history.

We only oppose the spreading of a unique language for intra-European relationships: in fact, by devaluating ​​the other languages, it contributes at mid or longer term to the decline or disappearance of the linguistic and cultural diversity that forms the common heritage and the particular richness of our European civilization, a sole entity in this diversity.

We also consider that, in so doing, Europe is losing at the international level this great comparative advantage of being able using, worldwide, one at least of its various main languages in dealing with most of its different counterparts, at their better convenience, without imposing them one only.

To enable ICEO’s proposals to be better known by the MEPs and MPs of all national Parliaments, we wish to entice all people who are opposed to English monolingualism to join the “European Committee against Monolingualism”, which has recently been created, temporarily supervised by ICEO.

We also appeal to all personalities, all associations, unions, teachers, professors,… concerned by or involved in the protection of linguistic diversity that makes the richness of our European heritage, to relay the campaign as widely as possible.

It would be a great honour for us if you would agree to support us, by signing our proposals, if you consider that they are conceptually interesting and relevant for practice.